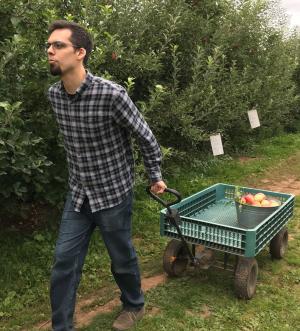 Connor at an orchard near Hood River, Oregon 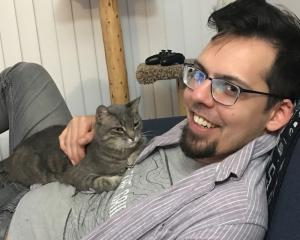 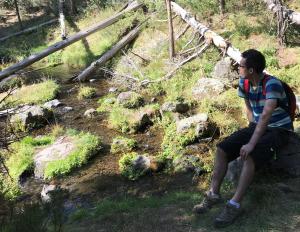 Connor near the Fall River campground in Bend, OR 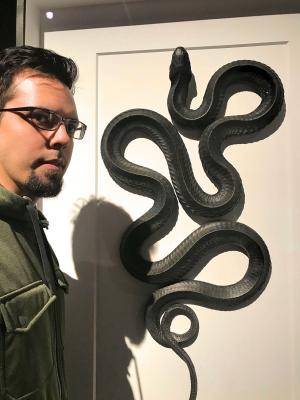 At the OMSI exhibit "Exquisite Creatures" in fall 2019

Connor Meldrum claims that he and his wife Cally don’t insist on being hired as a two-employee package deal when they apply for jobs, although their gig at Tigard Public Library is the third time they’ve worked in the same place together.

Two Meldrums is a lucky deal for Tigard patrons.

“It’s hard to pick what I like best about being a library assistant,” he says. “I enjoy helping people get what they need at the front desk but I’m also an introvert, so it’s nice to be able to work in the back sometimes.”

Meldrum’s library experience began in the library at Boise State, where he got a degree in fine arts. He enjoyed it so much he continued with a job as a shelver at the county library in Boise, where he and Cally met, and that marked their first time working together. Their compatibility clearly extended beyond the workplace – they were married in 2011.

After graduation in 2014, they moved to Portland, where Team Meldrum worked together for the second time with his-and-hers positions at Portland Japanese Garden.

They are now both full-time library assistants at Tigard.

“The tourism industry is such a different world,” Connor observes. “I was glad to get back to the library system.”

Although he knows patrons have missed being in the library, Meldrum says there’s a silver lining. “We’ve used the down time to work on lots of improvements – things we’ve wanted to do for a long time.”

Meldrum has always been artistic. “I drew all the time as a kid,” he says. His focus is on illustration and comics, which you can find on his website. He enjoys video production and editing and is currently working on a library video project.

Tigard Public Library has begun takeout service for patrons who want to pick up books and other materials, and Connor and the rest of the staff look forward to when they can once again welcome patrons into the building.

“When it finally happens, we’ll definitely be better than ever.”