The library catalog and event calendar will be unavailable between 7pm on Thursday, August 5 and 1am on Friday, August 6.  You will be able to use the alternate catalog and other digital library services during this time.

Deidra Menser to Library Patrons: “We’ll be in Your Corner” 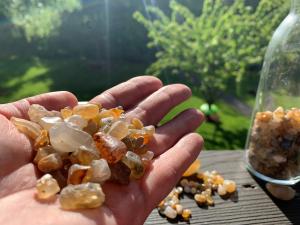 Menser was an avid reader growing up, which led her law librarian mom to conclude that she would love working in libraries. Deidra told her mother there was no way that was happening.

She’s now completing a master’s in Library Science and works as a library assistant at Tigard Public Library.

“Everywhere I’ve lived I’ve worked in libraries,” Deidra says. And that list is long. Menser, originally from San Diego, has covered Oregon from Ashland to Florence to Eugene and now Tigard.

Just as her mom predicted, Deidra loves matching patrons with books they’ll love or materials they need, and finding them answers to all kinds of questions. “I’ve had a love of libraries since childhood,” Menser says. “They’re my absolute passion … I’m a fan.”

She’s also a fan of visiting the Oregon coast, where she and her family go rockhounding for agates – gemstones created by prehistoric lava flows. “There are tiny ones everywhere,” she says. “The trick is to get the sun behind them so you can see them glow.”

Menser, who was adopted by a Polish American couple, loves the traditions and food she grew up with. “I have so many good memories of those Polish traditions,” she recalls. “Christmas just isn’t Christmas without pierogis.”

Deidra will finish her graduate degree from San Jose State University this summer. The program, which she has taken entirely online, has had unexpected benefits. “Completing this degree online has really given me an advantage in adapting to collaborating and doing library projects remotely,” she says. “I’ve had a leg up in the new reality of the remote workspace.”

The Tigard library has been innovating with online story times, scavenger hunts and other at-home activities for patrons, in addition to offering an expansive catalog of e-books and other digital resources.

“I want our community to know that the library is still here … working for you and thinking about you in this weird new world we’ve found ourselves in,” she says. “Whatever the ‘new normal’ is – we’ll be in your corner.”

It’s a sentiment her mother would be proud of.