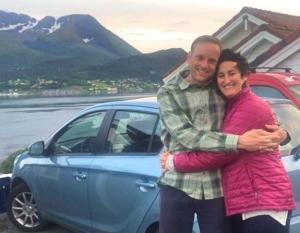 Hillary Ostlund in Norway with Kjell 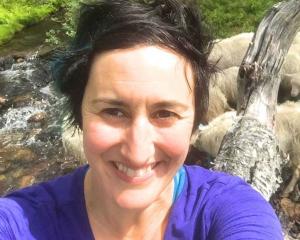 When Hillary Ostlund learned she could choose working in a library as an actual career she recalls, “I felt like I’d won the lottery!”

After working in libraries in both high school and college, it was a thrill to discover she could make it her life’s work.

Ostlund, library services manager at Hillsboro Public Library, breaks many librarian stereotypes – she’s an artistic and vivacious extrovert who is at her peak when engaging with library patrons and colleagues.  “I get my energy from working with other people,” she says.

She loves sports. Hillary is passionate about watching the Portland Trail Blazers, Thorns and Timbers. She’s been a tennis player for most of her life and plays in recreational leagues and tournaments.

“I love sports so much, if I could pick a second career, it would be to travel the world as a line judge for world-class tennis -- watching beautiful athletes playing my favorite sport.”

Born and raised in the Pacific Northwest, Hillary and her husband Kjell (a second generation Norwegian) escape to the wilderness in their vintage Scamp camper whenever possible.

But their wanderlust doesn’t stop there. Their honeymoon itinerary could be described as … unconventional. “Kjell and I honeymooned in the wilds off of Vancouver Island, British Columbia,” Ostlund says. “We went on a guided grizzly bear excursion into the remote wilderness.”

Despite her travels, Hillsboro is one of Hillary’s favorite places. “The growth in Hillsboro has been well-managed and maintains a strong sense of community. Neighborhoods are unique – from Old Town to the arts district to Orenco. The parks are beautiful and a great way to get out and enjoy the fresh air. I love working in Hillsboro.”

Ostlund has always been keen on two things -- helping people in need, and life-long learning. “I considered becoming a public defender or social worker, but I found that libraries are the nexus of all of these services,” she says.

She benefited from strong mentors. “My neighbor growing up, Mrs. Allstot, was also my high school librarian. She was in my corner and I thank her for guiding me, not directing me. She was a steady influence in my background.”

Hillary found her calling in her early 20s when she became a research librarian. “Helping people become who they want to be is very satisfying to me,” she says.

The pandemic crisis has given Ostlund and her staff at the Hillsboro library the opportunity to try new techniques and take their local programs and services online. “I could even say that the COVID cloud has a silver lining,” she says. “We can break with traditions and be more creative in growing our online services.” The Hillsboro library’s social media accounts are abuzz with online story times, trivia nights, book discussions and classes.

“We offer so many ways to engage as a community,” Hillary says. “I feel so fortunate to be able to contribute.”