A Lifetime Love of Languages and Libraries 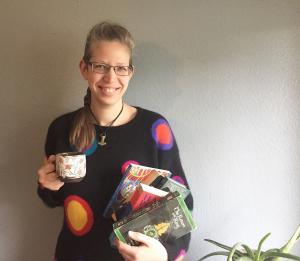 Maggie Hannahs and a stack a books

If you’ve taken part in any of the adult programing at Aloha Community Library, you might not realize those events are run by a fiddle-playing linguist with an affinity for the Ojibwe language and a love of fan fiction.

Maggie will be the first to tell you that, despite working in libraries, she “never really decided to work in a library.” It may have been preordained by the love of libraries and languages that runs in her family.

Her mother, Sandra, recently retired as the library director in West Fargo, ND, where Maggie volunteered as a shelver when she was a teenager.

“My mother showed me how to do things properly,” Maggie recalls. “And I learned that although you want your work to be correct, you also have to be able to let things go. You’re never going to have the library completely in order.”

After studying theoretical linguistics (Spanish classes were full, so she focused on Ojibwe) at the University of Minnesota in Minneapolis, she moved to the Portland area with her partner, now wife, Caitlin. She volunteered at the Tualatin Public Library, which later turned into a part-time job.

After progressing through a series of circulation jobs at several different Washington County libraries, her next career move was to the Aloha library.  She currently splits her work week between organizing adult events there and assisting with the adult summer reading program at the Washington County Cooperative Library Services.

In her spare time, Maggie plays the fiddle – an instrument she took up around age eight in her school in Durham, England. “I started out in group lessons,” she explains. “But the other students stopped taking them … so they turned into private lessons.” By age 12 she began attending a summer folk music school, which she continued for the next 10 years.

Today she plays, “mostly folk, some pub session playing, and for a casual Irish band.”

Expertise in literature and language are clearly in her family’s DNA.  Her father and stepmother are both experts on different aspects of Welsh linguistics.

She is also “pretty big into transformative fiction” – or fan fiction – where writers use characters or settings from other works (say, Star Wars or Harry Potter) to create a new story. It’s a genre that Maggie describes as, “satisfying to read, and way better than its often maligned reputation could lead you to believe.”

Maggie Hannahs’ wide-ranging and deeply rooted love of all things word-related make her the perfect resource for adult readers and patrons of Aloha Community Library.

She may not have foreseen the tale of her career including libraries … but it’s a happy plot twist for our patrons.

Check out this video of Maggie playing the fiddle: