The library catalog and event calendar will be unavailable between 7pm on Thursday, August 5 and 1am on Friday, August 6.  You will be able to use the alternate catalog and other digital library services during this time. 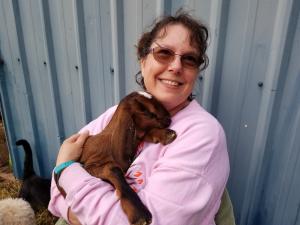 Susan Cackler and one of her kids

As you might expect from someone who works in a library, Susan Cackler says she “reads more than your average human.” What you might not expect is that she also reads to her goats.

Susan is library supervisor and programs coordinator for Banks Public Library. You could say that her love of livestock led to her current position. She grew up on an Oregon sheep farm (although she says she “doesn’t like sheep”), and now raises dairy goats on her own farm in Buxton.

Her children (now 23 and 24) were active in 4H for years, and Susan supervises the dairy goat show at both the county and state levels. The family’s love of farm life and raising animals runs deep. Her (human) kids, now living in Eugene and Corvallis, “still come home to see the baby goats.”

Which brings us to how this leads to … libraries. Susan was working in a restaurant when she met Denise Holmes, the library director in Banks. Holmes encouraged her to take “a very part-time job” at the library in 2007, where she found new ways to use her expertise in coordinating community programming.

Now full time, Cackler has overseen library programming for the last two years. To amuse the library’s young patrons, she brings pictures of herself reading to her goats. A guaranteed crowd-pleaser.

She admits to being surprised that she ended up working in the library, although she recalls that her husband wasn’t. His observation: “Aren’t those your people?”

While in-person programming is on hold, Susan is creating book lists and crafts for future Toddler Time programs. She writes and distributes library newsletters detailing at-home activities like cooking and gardening, and she’s creating garden kits that will be available for patrons. Writing about at-home activities comes easily for a woman who milks goats daily and makes her own yogurt, cheese and tapioca pudding.

Work inside the library also continues. Library staffers are checking books and making needed repairs, and doing an intensive cleaning of every shelf.

“It’s going to be beautiful in here for our returning patrons.”